Every spring, the Richmond Association grants scholarship awards to Richmond-area students. Our criteria emphasize academic excellence, well-roundedness, thought-leadership, character, and the quality of a written essay on the value of a liberal arts education to the individual and society. Selection is always difficult because of the exceptional quality and number of seniors who submit applications.

Thanks to your generosity, we proudly introduce five scholarship recipients for 2021

Maria Elena Smith, Colonial Heights High School. I will attend the University of South Carolina in the fall to study sports marketing and management. One of my coaches has always told me that “adversity equals success.” Using what my coach has taught me, I have implemented her advice into my life, regardless of the activity! One of my favorite things growing up was going to my grandparents every Sunday for dinner which was usually pasta since my mom is Italian.  I loved helping my grandmother in the kitchen. My family is a very important part of my life.  As long as I have their love and support, I have everything I need to be happy and successful.

Afreen Haq, John Tyler Community College. I will attend the University of Virginia to study math. I’ve developed an interest in teaching math, so in 10 years, I might be teaching in a university setting or working in cybersecurity, but I’d love to do research as well! Outside of my curricular activities, I practice art, writing songs, and producing music.

Jacob Dunn, Reynolds Community College. I will attend VCU in the fall to study English with the goal of attending law school.  In 10 years, I see myself practicing either family or criminal law. I try my best to be active in my community, and one of the ways that I do that is by coaching a swim team. It’s rewarding to see swimmers grow as the summer progresses. Coaching the swim team allows me to maintain a connection to the sport that I love and the camaraderie of a team.

Violeta Rodriguez, Reynolds Community College. I will attend VCU in the fall to study Spanish and Psychology. I aim to get my certification in Spanish to English translation and interpretation so I can help my Hispanic community out in the medical field. I also hope to continue as a Psychology major so I can potentially become a bilingual therapist. In the future, I want to be able to help fund some scholarships myself to provide financial help for fellow Hispanic students.

Micah White, John Tyler Community College. I will be attending VCU this fall to study Psychology. I have a certain hardwired propensity towards problem solving, particularly interpersonal problem solving. In 10 years, I intend to earn my PhD and work in a clinical setting to attend to patients on a daily basis. I would also begin the processes of working with nonprofit organizations and collaborating with donors to prepare to open a nonprofit organization of my own. With the nonprofit, I intend to alleviate the problems that come with the social isolation that has become prevalent in the United States. A central hub for community engagement that also provides essential needs and services can uproot a number of the issues that manifest as psychological pathology in many people. 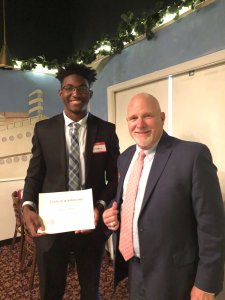 Ranked 6th place in the 3A state wrestling tournament 2019

Will be attending Virginia Military Institute and plans to study engineering 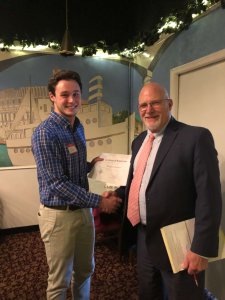 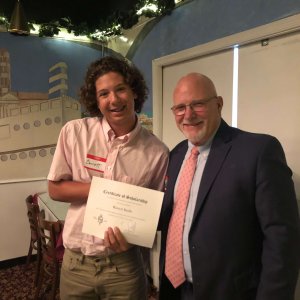 Volunteers with scouting for food and tri cities workcamp

Recipient of the Eagle Scout Award 2019 and Optimist History Award 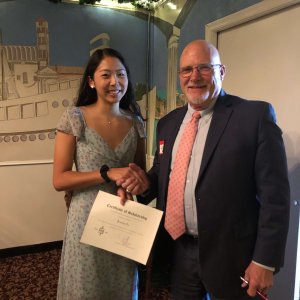 Member of Robotics Team and Varsity Track and Field

Volunteers with Children’s Hospital of Richmond and St. Mary’s Hospital 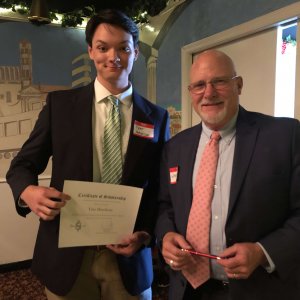 Editor of his school yearbook

Member of Battle of the Brains, and founder of SEAA (Saints for Environmental Awareness and Action)

Volunteers with Science Museum of Virginia and Richmond Astronomical Society 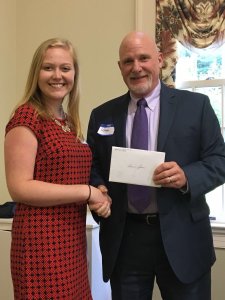 Sierra R. Spain graduated from Varina High School in 2017 with a GPA of 3.99.  She showed herself so talented both in the sciences and in communications in High School that upon graduation she found herself in a quandary about which university to choose:  the University of Virginia or Virginia Tech.  When she appeared to accept her PBK scholarship in June at the University of Richmond, she had decided to attend Virginia Tech, but was uncertain about whether she wanted to be a communications specialist or a physician.  She is well qualified to pursue whichever field she chooses.

In addition to working two jobs in high school, Sierra challenged herself with the most rigorous courses in her school, and while engaging in multiple extra-curricular activities, and serving as captain of the cheerleading squad. 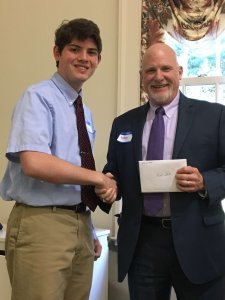 Noah Slate graduated from Thomas Dale High School in 2017 with a weighted GPA of 4.61. Noah has aspired to be the consummate musician his entire life.  He progressed from piano, to trumpet and settled on the French Horn as his primary instrument in his multi-faceted musical endeavors.  From the school’s marching band, show band, wind ensemble, and pit orchestra at Thomas Dale, he has participated in the Richmond Youth Wind Ensemble and the Richmond Symphony Youth Orchestra during his high school career.  While he has become a dedicated tutor of students with their musical arrangements and in learning how to play piano, he was also the recipient of the  Thomas Dale High School Principal’s overall Scholar Award in 2014.

He plans to pursue music composition for film and television and other visual media at the Berklee College of Music, although he will spend his first year by studying music in Valencia Spain. 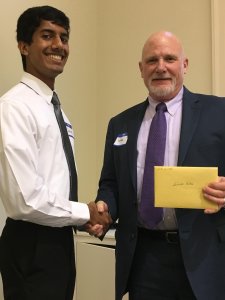 Samarth Kishor graduated from Maggie L. Walker Governor’s School in 2017 with a weighted GPA of 4.32. Samarth showed himself to be among the most uniquely gifted of the students to have attended the Governor’s School.  While he has accomplished much in his area of major interest: computer science, he epitomized the Phi Beta Kappa motto “love of learning is the guide of life” in every aspect of his broad curriculum at Maggie Walker.  Not only did he engage in learning Spanish and Japanese, and receiving awards in both languages, he also was an accomplished saxophone player and teacher.  He also has a strong commitment to community improvement.  He spent many hours volunteering in the Spanish speaking community helping non-English speaking adults with GED preparation. 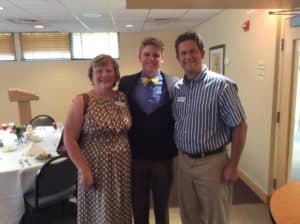 Daniel J. Kovach graduated from The Steward School in 2016 with a weighted GPA of 5.1. Aside from his high scholastic achievement, he became an outstanding actor in school productions, was a standout swimmer on the school’s team, and was active in student government. In addition to winning the Jefferson Book Award from the University of Virginia and several science awards, Daniel showed considerable talent for languages. He won the school’s Latin award, and studied and gained fluency in Italian and Spanish. In addition to an innate desire to learn languages in order to communicate internationally, he intends to use his intense interest in science in his goal to become a physician. 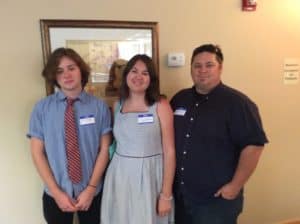 Thomas J. (“TJ”) Krivanec graduated from Open High School in 2016 with a GPA between 3.5-4.0. His distinctive interest in the arts was evident in his study of all art forms. He became especially adept in the both pictoral art and music while excelling in all other high school subjects. While engaging in a challenging academic schedule, he also held several jobs during high school.

He was accepted early in the Art Foundation program at Virginia Commonwealth University, and will use his scholarship toward his studies there. 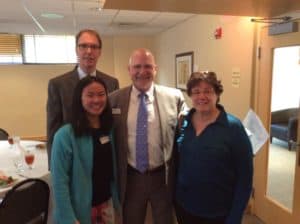 After only three years of high school, Amy Ariel was an August, 2016 graduate of Godwin High School. While in high school, she became heavily involved theater technology and lighting design involved with television and cinema. Not content with the technical aspects of drama, she also acted and was given the Outstanding Thespian award for her acting in productions at Godwin.

Amy was not content with production and acting, so she immersed herself in Mathematics and Science in which she received awards. Finally, while engaged in her scholastic and work in the theater, she also was selected to attend the High Tech Academy pre-engineering program. She plans to pursue engineering as well as theater technology and lighting design at Virginia Commonwealth University.

After her first semester, she wrote the executive committee thanking the Phi Beta Kappa Association again, adding that the scholarship enabled her to concentrate on learning the craft of theatrical lighting design, adding that she wished to “…continue representing Phi Beta Kappa as I expand to more challenges on the coming semesters.”

Congratulations to these outstanding students!

The Richmond Association of Phi Beta Kappa Scholarships are funded with private donations from our membership. Thank you to all who have donated generously. For information about giving to the fund, contact us.

A special thank you to the members of the 2016 RA Scholarship Committee. For information about serving on the committee, contact us.

To join or learn more: